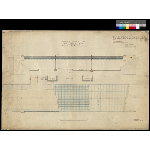 Two drawings on one sheet showing general elevation to west and general plan of superstructure. Drawing illustrates the agreement between the City of Edinburgh Road Trust on the first part and the North British Railway of the second part.